Embedded from my GotWarcraft G+ page:

As noted below, this sale probably ends real soon now and the year’s subscription will take you through the Warlords of Draenor launch (maybe happening in July ’14????) with no additional costs. Pretty good deal, don’t you think?

What is it? Zygor Guide 5.4 is an n in-game level guide which will blast you through the quests ASAP, regardless of your experience or gear. You’ll never wonder where to go or what to do and you’ll hit 90 very quickly.

Where is it? Go here, now. And there really is a timer on their website. When it hits zero the sale is over.

The longer version: Zygor guide 5.4 is an in-game addon that will take your through the quests, for any race or class, as quickly as possible, and it’s fully updated for patch 5.4. You’ll take the most efficient route and skip everything that you don’t need (unless you want Loremaster, then it will help you do all those quests.) It’s also smart enough to know your level and your location. If you’re leveling quickly (eg: lots of rest XP,) or you level up a few levels in the dungeons or PvP, Zygor will “see” your new level and tell you the best place to go next. It even gives you a way to dump the old quests.

You’ll never find yourself cruising around in an area that’s too low or too high for you. It even has a difficulty setting in the options, so if you want things a bit tougher or less tough, just click a button.

Whether you’re brand new to WoW or decked head to toe in heirlooms and the best gear Zygor will blast you through the levels ASAP. It can auto accept quests and turn-ins, help with gear, help with talents, and so on. You’ll never wonder where to go or what to do.

Before and after leveling: 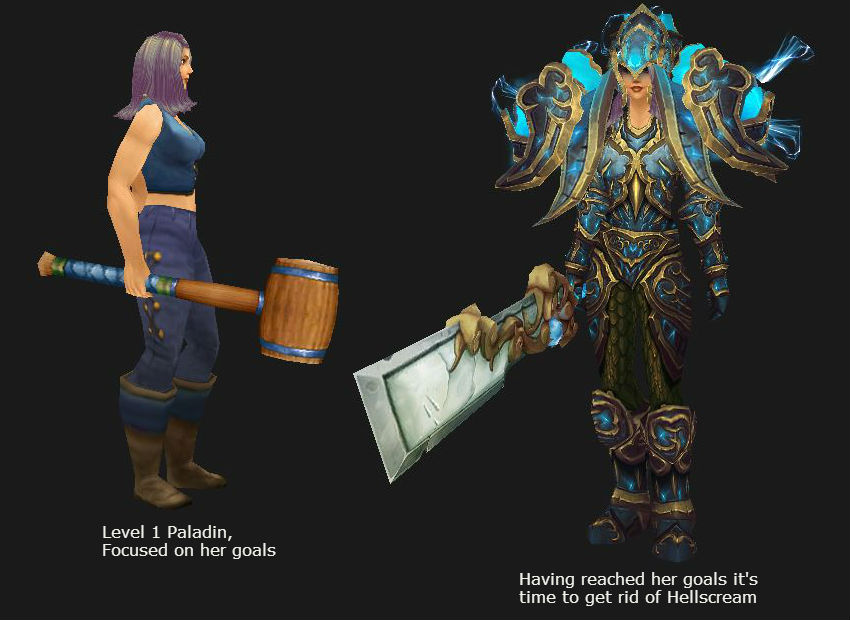 Gotta bunch of alts that need leveling? Or even a new main? Zygor guide 5.4 is the best way to do it and it’s gonna be awhile before the next sale. And there is a deadline, so get yours here.

I haven’t started a DK yet. Yeah, I know, I’m bad. I did play one for awhile in the beta and I’m looking forward to it, but I think I’m going to get my Rogue up to 80, first. I haven’t had much time to play recently and I’m only level 73.

So. DKs and PvP. What do you think of them as they stand, now?

Are they the overall destruction machine of choice? Or strong against casters and Ok against others? Or…? Are they the Gankers or the Gankees?

For the one or two of you (like me) who haven’t started your Death Knight yet and want a leg up, the free leveling guide to the DK starter area is still up.

Planning to play a Death Knight when Wrath goes live? Or are you going to give it a couple of weeks to let the hordes move on?

If you are going to join the Deathknight horde (at any time) then you might want to check out this free DK leveling guide (a PDF) that covers the DK starting area. Both Horde and Alliance will be using the same area, just in case you didn’t know, so this guide applies equally to both sides. (By the way – I didn’t write the guide.)

When I was running my DK through that area some weeks back there were a number of people asking “Where’s the…?” “How do I…” etc.  So I think that a lot of people will find this to be useful. Download it here and save to your disk.

Update 7/14/2012: The guide was put together by Shawn of Extreme leveling, but he is no longer offering guides.

If you want a killer leveling guide that will take your DK (or any class) from start to whatever the level cap is when you read this, then give Zygor a close look.

Nyhm is a character best know for making a series of well loved videos on YouTube. Most of these videos have hundreds, or thousands, of 5 star ratings from his fans, so check them out sometime. I’ve posted a few of Nyhm’s videos here, but just search his name on YouTube and you’ll find the others.

I managed to catch Nyhm in-between battles against the evil Gnome hordes and asked him a few questions, but note the edits, below:

edit: As you’ll see in the comments there is some, ahem, question, as to whether this fellow is actually the some one as the one who did the videos. I’ve also removed the links to the guides until I get this sorted out.

The commenters below are correct, there are two Nyhms. One does the videos (and it’s his video below) and the other Nyhm writes the guides. Their only connection is the same name and that they both play Warlocks. So as I mentioned in the other post, from here on out I’ll refer to them as Nyhm of the Videos and Nyhm of the Guides whenever I mention either of them.

The interview is from Nyhm of the Guides:

How long have you been playing WoW?

What kind of raiding and PvPing do you do?

I don’t do much raiding anymore, but I pvp all the time on alts, friends’ characters, and my arena team.

What keeps you playing after all this time?

PvP just never seems to get boring, and I have a lot of friends that play.

Is Nyhm your main character? Or mostly just the face for your productions? (And I did find him on the WoWarmory.)

What got you into making videos?

Nothing really, I just decided one day that I wanted to make WoW Videos.

Who’s on your production team? Or do they prefer to remain in the shadows?

My friends help me out a lot.

What equipment and software do you use to make the videos? (He makes videos related to his guides.)

What’s the first character you’ll be working on when Wrath of the Lich King is officially released?

Are your guides written from your own efforts and experiences or do you have a team behind them?

What made you decide to write leveling and gold guides when there is quite a bit of competition already?

One way to keep the game interesting is doing things out of the game like making videos or guides so it was just another WoW related project that I wanted to complete.

So there you have it, the (really short) Nyhm Interview. If you want to check out his WoW guides you’ll find them here.

And now, Nyhm of the Videos will explain, in great detail, why Mages pwn.

A couple posts back I put up a Nyhm video, Got an Epic, and also mentioned Nyhm’s guides.

If you need a 1-80 leveling guide then check out Zygor’s Guide.

I wish I could claim credit for these, but they’re both from the people at Dominate Your Server. Cool site, great tips, and their emailings are full of good stuff.

1) Never quest out of rest.

Questing is faster than grinding, but only if you have your quests somewhat organized. This is why I like leveling guides. Many players don’t really need them, especially after leveling several characters all the way.

Always stop in an inn when done and always make sure you have rest XP available when playing your toon. When you run out of the rest XP then you hand in whatever quests and log out in an inn to recharge.

If you run out of Rest XP and just have to keep playing then go for it, or farm for items or gold or rep or go kill other players. Heck, log into your auction house banker and do some buying and selling.

If you stick to the rest XP and you have your quests organized you should find yourself leveling very quickly.

1b) Roll several toons and run …

If you always pair with someone to do your leveling you’ll find that the levels go by significantly faster.

You’ll get less XP per kill, sure, but you’ll kill things alot faster. You’ll also have less downtime, even if the extent of your healing capability is your first aid skill.

You’ll be able to take on tougher mobs, those silver elites will be much easier, the gold elites will become something to sneeze at, team quests will be a lot easier, and your chances of getting ganked on the PvP server are a little less. Conversely, your chances of successfully ganking others is that much better.

My wife and I play together alot. She’s pretty new, but is coming along quickly. One pair is my Hunter and her Rogue, the other is my Pally and her Hunter.

It works out very well. We truly suck at the PvP part on these toons, but we’ll get there.

Now get back to work.

Leveling and gold gathering are two topics of interest to pretty much all WoW players. Well, here’s a fellow who’ll show you how to do both.

I’ll post a longer one, presently. (edit 6/12: The longer guide review is here.)

Zygor’s Leveling Guide is one of the newest of the leveling guides and I think it kicks the iDemise guide in the butt. Both of these are in-game guides, but while the iDemise guide is attached to your main map (and it ain’t at all bad) the Zygor guide is present on your main screen at all times.

It’s an addon, so installation is simple. You dump it into your addons folder and it’ll load automatically. If your character is new just start from step 1, otherwise scroll through the guide till you find the right place for your level and go from there.

I ran an Undead Warrior up to 12 and a Blood Elf Paladin up to 16 using the guide and had no issues and never had to consult the quest log.

Here’s a screenshot of the minimalized guide

Class quests are not included. You’ll have to grab those on your own, they’re not part of the guide. But then again, Joana’s Guide only had the Hunter quests and the iDemise guide has none, either.

Where to go next is also detailed. New to a zone and not sure where to go to get to the next one? Zygor’s will show you the way.

Notes: I didn’t have to look at the quest logs at all. No trips to Thottbot or any of the other WoW sites and I hardly looked at the big map, except to keep an eye on my location.

How much time do you think you’ll save on your blast to 70 by not having to consult your quest logs, thottbot, the main map, or having to set your own waypoints?

The perfect guide? Well, for that it would have to include the class quests. It would also have to remind you to grab flypoints, repair your gear, go to the bathroom, get something to eat …

So check it out here