Update: The lockpicking quests have been removed from the game with WoW 4.0, so this guide is now completely obsolete. I’ll leave it up in case you are, for some reason, playing an earlier version of WoW. (Private server, maybe?)

Pickpocketing is still worthwhile as you will still get some cash and occasionally find nice stuff in pockets or in the boxes you pick, such as the Rogue’s Draught (a nice healing potion.) Picking the boxes won’t level your skill, but they’re still worthwhile since they’re free. Some doors and chests will also need your skills, though Blacksmiths can make keys and Engineers can just explodinate the locks.

If you need more Roguish info, check out the GotWarcraft Rogue Guide.

As we all know the Rogue lockpicking skill is the path to riches, glory, rep… Well, ok. Maybe not. Still, it does have it’s uses, such as opening doors, chests, and boxes in raids. It might result in some nice tips if you want to park in a major city and advertise that you’re opening lockboxes.

Lockpicking is one of the skills, like your weapon skill, which is locked to your level. So if you start your lockpicking career at level 16 then your max possble skill will be 80. If you start at 70 (why wait?) than you’ll max out at 350. Of course, when the Lich King expansion comes out and the level cap is raised to 80 you’ll get a max of 400 skill.

If you’re a lower level Rogue then your path to lockpicking will be a bit different from that of someone building it when they’re already 70.

In a nutshell, for the lower level rogue: Do the lockpicking quest and pick the practice locks until your skill is capped. Then you’ll pickpocket all the rest of the boxes you’ll need for the rest of your career. That’s about it. Sap and/or your Distraction ability (picked up at level 22) will be invaluable for this.

All humanoid mobs in the game, at least after level 18, have some chance of dropping a lockbox when you pick their pockets. This includes Undead, Nagas, Birdmen, Orcs, Demons, Ogres (and just what is in those pockets?) and so on. Make it a routine to always pick their pockets, then kill them. You’ll generally find it easy to keep your skill capped this way.

These lockboxes usually contain herbs used for the Vanish ability and for the poisons, some vender junk, and on rare occasions something valuable. For example, I’ve found Living Rubies a couple of time in these boxes. On my server they sell for 60g a pop.

If you’re high level and trying to powerlevel your lockpicking then the drill goes something like this:

The Horde has a poison quest which involves a lockbox at the final location. Once picked the box will respawn in seconds. In theory you can pick this thing until your skill hits 180+, but it starts to slow after 160 or so. Working it to 180 will be tedious. The Alliance side has the poison quest, but the box can only be opened once.

edit – Things have changed and now the Horde box can only be picked once. I guess Bliz thought that picking the one box many times was just too easy. Darn.

By the way, you don’t actually have to do the quests. You can buy your thieves tools off a trade goods vendor, you get the skill from your trainer, and you can go and pick the boxes at any time. Do the quests for the XP and any items that may appear as rewards.

All of these quests are part of a chain. See your Rogue trainer for details. Naturally, any Horde or Alliance who like to live a little more dangerously can get the lockpicking practice in at the other side’s area. 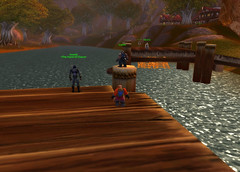 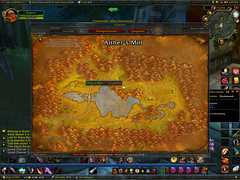 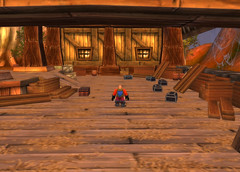 Rogue Lockpicking Quest for the Horde 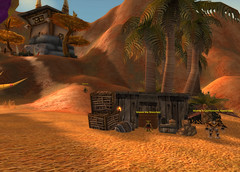 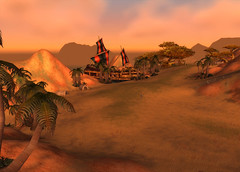 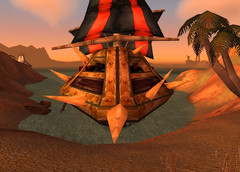 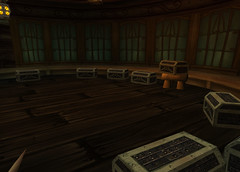 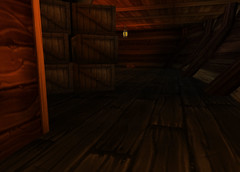 Raising Your Lockpicking Past 80

Talk to your friendly neighborhood Rogue Trainer to get the next location to raise your lockpicking skills. Otherwise, if you’re Horde, the Rogue’s Poison Quest is the next best opportunity to level your lockpicking skill. The chest in the tower at the end of that quest requires 70+ skill and can be picked repeatedly until you hit 170+ (though going past 165 is tedious.) The only thing in your way here is dealing with the 24 Elite guarding the chest.

Edit – The Horde box for the poison quest can no longer be repeatedly picked.

Or you can Swim for it – First, get an elixer of water breathing off the auction house. Lake Everstill, in Redridge, has scattered footlockers under the calm surface. 70+ skill to pick, they’ll get you up to 160+ if you can hang with it long enough. Just keep an eye on the 25 Elite swimmers wandering about.

Both of the above areas are contested zones, for those of you on PvP servers.

The wetland area, North East on Menethil Harbor, around the Bluegill Murloc camps, has quite a few footlockers. They’re mixed, some requiring 75 skill, others 110. Kill Murlocs, get cooking supplies (from the drops) and pick locks. What could be better?

Durnholde Keep in Hillsbrad Foothills. There are footlockers scattered around the grounds (mostly on the lowest level) requiring a 110 skill to pick. Kill off the level 20 something mobs in the area and work these until you get bored (or hit 170 or so.) You can also pick lockboxes off the mobs here, but they require skill 1 to open, so are probably worthless to you.

You can also try the Murloc camps in the Wetlands (see above,) or the Windshear mine in the Stonetalon Mountains, for more footlockers.

The sunken Footlockers off the Sar’theris Strand, in Desolace, west of the Thunderaxe Fortress, has submerged footlockers needing your 150+ skill. Swim a little deeper and you’ll find lockers requiring 175+ skill. That Water Breathing elixer is highly recommended here.

If your Rogue is averse to swimming, then Angor Fortress, in the Badlands, (around 43,31) has footlockers (upstairs) requiring 150 skill, and the lowest floor has footlockers requiring 175 skill. You’ll also get the chance to kill dwarves and the occasional player.

Pickpocketing level 32+ mobs will result in boxes requiring 75+ skill to pick. You’ll be level 30+ to be able to get that 150+ skill anyway, so that’s a good way to go.

Going up to 225 Lockpicking

Pickpocket 42+ mobs for boxes requiring a 175 skill to pick.

Swim the deeper waters of Sar’theris Strand for the suken footlockers with the 175″ skill requirement.

Open the boxes in the lower level of Angor Fortress.

Open the doors in and around The Scarlet Monastary.

The Sunken Temple, in the swamp of sorrows, has submerged footlockers that are calling out for your 175+ lockpicking skill.

You need to get to 300 skill before you’ll be able to open anything in Outlands, so here we go:

The Bay of Storms in Azshara is supposed to have a a few mossy footlockers (skill 225) but I only found a couple. One on land, one under water.

The Slag Pit in Searing Gorge has dented footlockers with a 200 requirement in the lower areas, and the lockers in the upper areas require 225 skill.

Keep working the 175 skill boxes you’re picking out of those pockets. The mobs 52+ drop boxes requiring a 250+ skill.

The Lost Rigger Cove in Tanaris has a fair numbre of boxes wanting your 250+ skill.

The Blackrock Depths dungeon has a couple of doors needing a 250+ skill to pick.

For your final few points try Tyr’s Hand in the Eastern Plaguelands. Youi’ll find scarlet footlockers and pick strongboxes out of wandering pockets. Don’t worry about killing anything that’s too tough, just work the lockers (if it’s safe) and pick the boxes. Assuming that you’re at least 60 you should be able to hit 300+ skill soon enough.

If youi’re over 60 you can hang out in Tyr’s Hand and keep working those boxes, or you can head over to the Outlands and start picking those pockets.

A great location for leveling lockpicking between 300 and 350 is in Feralfen Village in Zangarmarsh. This is located south of Coilfang Reservoir and Twin Spire Ruins, west of the Lagoon and east of Quagg Ridge. There are three areas of buildings clumped together with a handful of wicker chests in each.

The tower in the western section of the village has wicker chests on the first floor and on the top floor. You can also pickpocket the mobs (levels 61-63) with an 11% chance of getting a Strong Junkbox (requires Lockpicking 300.)

Another place at 70 is outside of Black Temple in Shadowmoon Valley (very east side, hunk of land sticking out). Stay near the Blood Elves that are not the demon hunters. Pickpocket these and kill them to have them respawn. Continue this from 300-350 for the most efficient skilling up.

Now that you’re level 70 and have mastered the Lockpicking skill it’s time to move on to more interesting things.

Would your rogue perform better with swords, maces, or daggers? Is that Hunter getting you down only because you got the wrong talent build? Does it take so long to get your final mount, because you do the wrong quests or farm gold in the wrong places?

Imagine that you simply knew the answer. You wouldn’t need to spend endless hours on frustrating trial and error attempts. Instead you would be standing in front of the auction house answering tells about that devilish looking sword at your side. The World of Warcraft Rogue Guide shows you how to get there!

2 Responses to “The Rogue Lockpicking Guide”