The Quests for the Blade of Cunning

At level 10 rogues can do a series of quests in order to obtain a really nice dagger: the Blade of Cunning, a unique one-hand dagger with +2 Agility and speed 2 that does 6.8 dps. This can be very helpful at these lower levels. You also gain XP; the amount varies depending on your level.

The number of quests varies substantially depending on your race. Alliance rogues have two to three quests. (The Undead max out at five quests.)

The skills you use also vary depending on race. For the Alliance, Night Elf and Human rogues utilize their sneaking, sapping, and pickpocketing skills, while Dwarf and Gnome rogues kill one NPC in order to speak with another.

For all of these walk-throughs I have included maps, map coordinates, a verbal description, and screenshots. I have offered suggestions for dealing with the trickier parts of each quest series, as well. Hopefully this information will make your questing easier and more enjoyable. Let me know if this helped by leaving a comment at the end of this article.

Here’s to your roguish questing!

The level 10 quests for the Dwarf and Gnome rogues consist of three quests, the mot for any Alliance rogue. The second, main quest requires you to kill one NPC and then speak with another. There is no requirement for sneaking, sapping, and pickpocketing as with the level 10 night elf and human rogues.

The first quest starts with Hogral Bakkan, <Rogue Trainer>. He is in Kharanos inside the Inn in a back room. 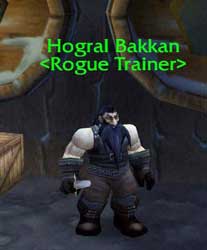 Hogral sends you to Hulfdan Blackbeard, in the thieves’ guild in the Forlorn Cavern in Ironforge. (51,14) 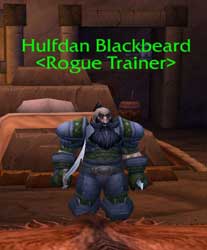 The Forlorn Cavern is in the north in the outer ring of Ironforge. You will see the Shady Dealer standing at the top of the steps to the building. Go inside and downstairs to find Hulfdan. If you look at the map of Ironforge he is approximately at the point of the V in Forlorn Cavern. (51,14) 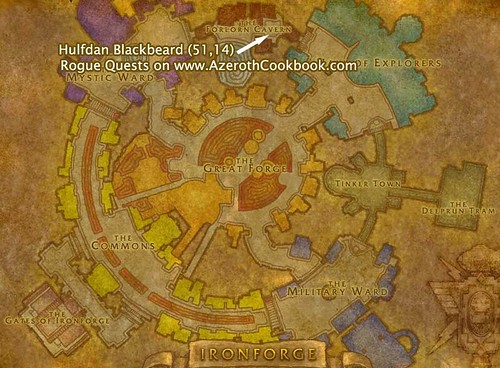 For the second quest Hulfdan tells you to speak to their undercover agent Onin MacHammar near Gnomeregan and bring back his report. Apparently Onin is undercover (stealthed) among a group of lepers.

Onin MacHammar is west of Brewnall Village and the entrance to Gnomeregan. Looking at the map he is just to the left of the B in the name Brewnall. (25,44) 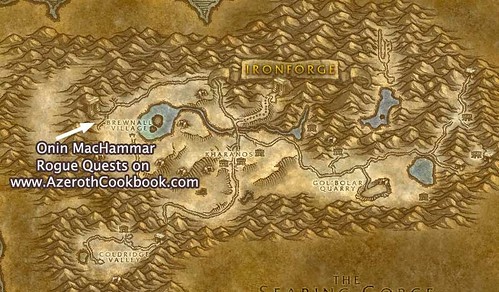 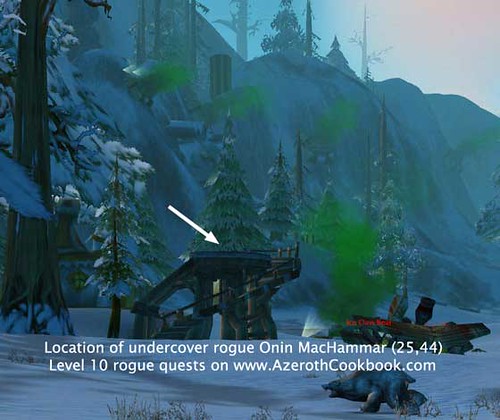 NOTE: A rare level 11 silver elite gnome spawns under the tower where you find Onin MacHammar. If you are lucky he will be there for you to kill, and maybe he’ll drop a green! If you don’t want to kill him you can stealth past him to climb the tower.

Onin is stealthed on the top of a wooden platform-tower. There is a level 11 gnome leper on the platform with Onin. The leper will attack you when you try to speak to Onin, so just kill the leprous little gnome first. 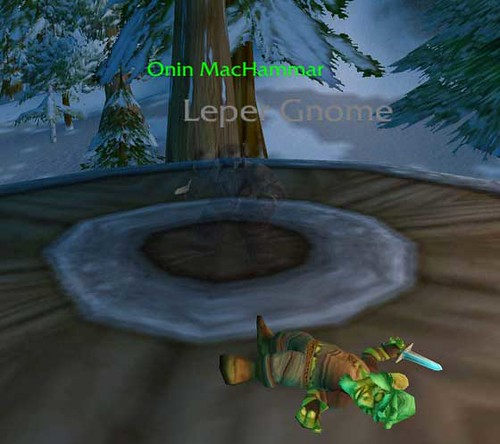 Onin will give you his report. Return to Hulfdan, who receives you with his usual charm and grace and rewards you with XP and the Blade of Cunning, a unique one-hand dagger with +2 Agility and speed 2 that does 6.8 dps. Sweet!

The level 10 Human rogues have only two quests to complete, but as with the Night Elves, the second one can pose a challenge. In this case the difficulty is due to the location.

You obtain the first quest from Keryn Sylvius <rogue trainer> in the Lion’s Pride Inn in Goldshire. Go up to the second floor of the Inn. You’ll find Keryn in the first room on the right at the top of the stairs. (43,65) 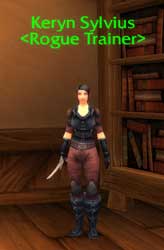 Keryn requires you to deliver a package to the secret Stormwind Intelligence organization SI:7. SI:7 is an Alliance rogue covert ops organization. SI:7 is also a sly reference to the British Military Intelligence rganizations MI:6 and MI:5. SI:7 is run by Mathias Shaw, whose headquarters are in the Stormwind Barracks.

You will find Mathias Shaw in Stormwind’s Old Town quarter, in the south-east section of Old Town. 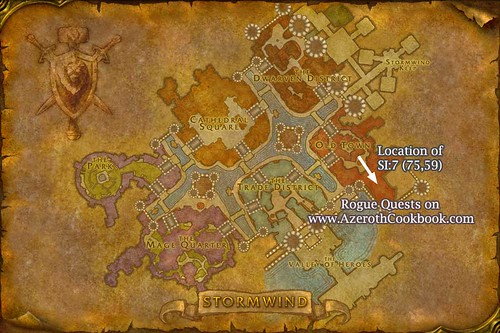 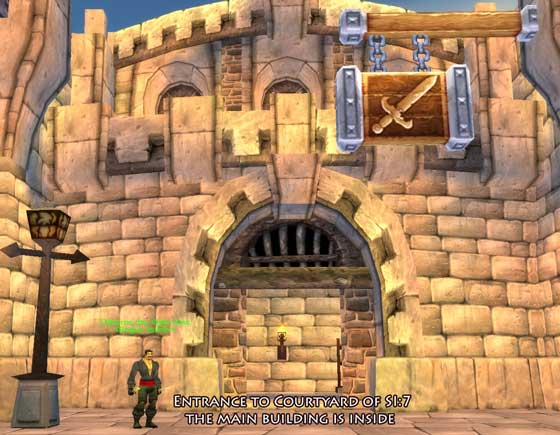 Pass through the courtyard and enter the building. You’ll find Master Mathias Shaw in a room on the second floor. (75,59) 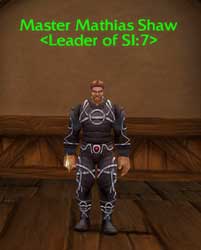 Mathias Shaw sends you to Jerod’s Landing to obtain the shipping schedule for smuggled goods from the Defias Dock Master. In true Mission Impossible fashion you are told that you should be stealthy and not be dicovered: “should you be discovered, SI:7 will disavow all knowledge of your existence.” Time to use your sap and pickpocket skills!

Jerod’s Landing is on the north shore of the river that marks the southern boundary of Elwynn Forest. It is just south of and between Brackwell Pumpkin Patch and The Maclure Vineyards, and it is full of Defias and bears, with the occassional murloc thrown in along the shore. Go south from Goldshire, avoiding or killing the Defias and the bears, until you reach the river. Jerod’s Landing is a bit east on the river. (47,87) 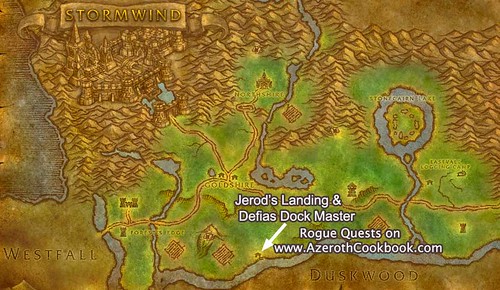 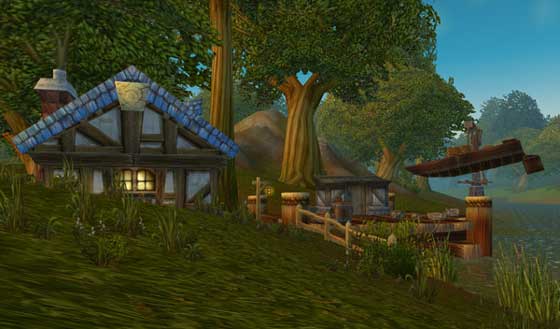 While he is alone in the house enter in stealth, target him by tabbing or left clicking, sneak up and sap him, and then pickpocket him. Make sure that you obtained the shipping schedule, then leave and return to Master Mathias Shaw.

Note: If he does not have the shipping schedule that means it was recently looted by another rogue. It will respawn, but if you are in a hurry you can kill him, wait for him to respawn, and then sap and pickpocket him.

When you return to Master Mathias Shaw you will receive your XP and the Blade of Cunning, a unique one-hand dagger with +2 Agility and speed 2 that does 6.8 dps. Sweet!

The level 10 Night Elf rogues seem to have it easy with only two quests, but the second one can really be a challenge.

The first quest is one of those simple quests where the questgiver sends you to locate the next questgiver in the chain. In this case it is the lovestruck Jannok Breezesong who asks you to deliver a rose to the night elf he adores, Syurna, the rogue trainer. 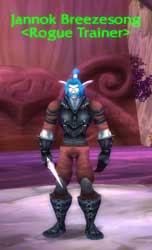 Start with Jannok at the Inn in Dolanaar (56,60) to get quest #1, and then take the road to Darnassus.

Syurna is in the Cenarion Enclave in Darnassus inside a tree. As you enter Darnassus heading west go straight ahead across the bridge to the island with the Bank. Turn right (north) and cross another bridge to the Cenarion Enclave. Walk straight ahead towards Fandral Staghelm’s tree. Just before Fandral Staghelm’s tree, in the area of the riding instructor, turn left. You will see a path that leads slightly uphill to an opening in the base of a tree. 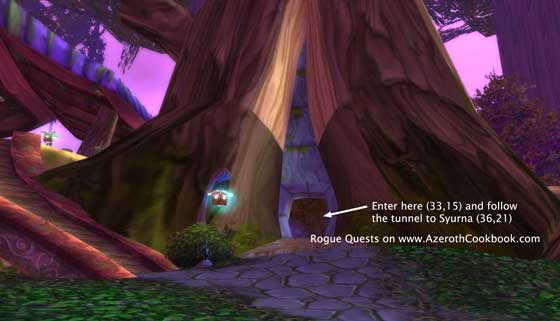 Syurna sends you on a quest to find what Sethir the Ancient carries in his pack. She tells you that force and diplomacy haven’t worked, so she wants you to try stealth. Here’s your chance to use your sap and pickpocket skills.

You will find Sethir the Ancient at the north-west border of Teldrassil in the Oracle Glade. Leave Darnassus heading east, then take the path that branches off to the north. As you travel be prepared to do battle with harpies and giant spiders.

Follow the path till it ends at the Oracle Glade, and then continue north until you are just north of the letter O as it appears in the name “The Oracle Glade” on the map, at the northern border of Teldrassil. If you have map coordinates Sethir the Ancient can be found at (37,24.) 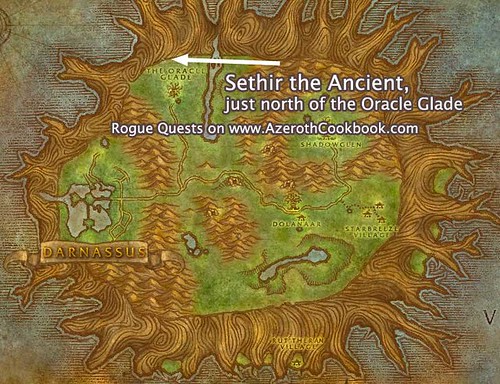 NOTE: There are a couple of other quests you can do in this area as long as you are here:

You will see a sort of notch or “V” in the edge of the world with a tree branch beyond it. (37,24) Sethir the Ancient walks a set path on the two branches of the huge tree at this location. Sethir is guarded by several minions you won’t see until they spawn, and they if you attack him or if he sees you, so you must be stealthy.

Wait in stealth until you see Sethir as he appears in this picture at the “V.”

He will turn and walk away from you and over onto the connecting branch to the right.

Here is a picture of Sethir’s path on the tree branches. 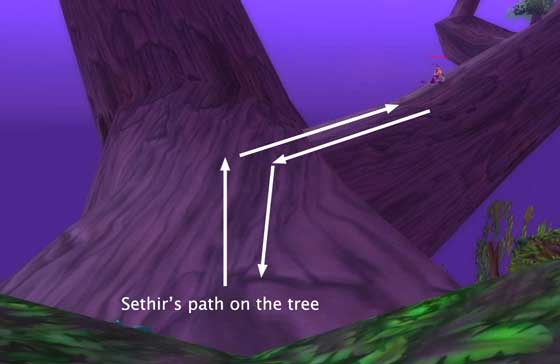 Your job is to stealth behind old Sethir and sap him, then pickpocket him, and stealth away without alerting him or his minions to your presence. You can only get his journal by picking his pocket; you can’t get it if you kill him.

There are a couple of ways to do this. The one I suggest is this: Wait in stealth near the V (not TOO close) for Sethir to appear and follow him when he turns to walk back down the main branch. Get close enough to sap him, pick his pocket, then turn and stealth or sprint away before anyone gets you. Note that you do not have to be right next to your target to sap him. You can sap from some distance away. As you approach him start spamming your sap button until it works, then pickpocket, turn, and (still in stealth) retreat using sprint just to be sure you avoid his minions. 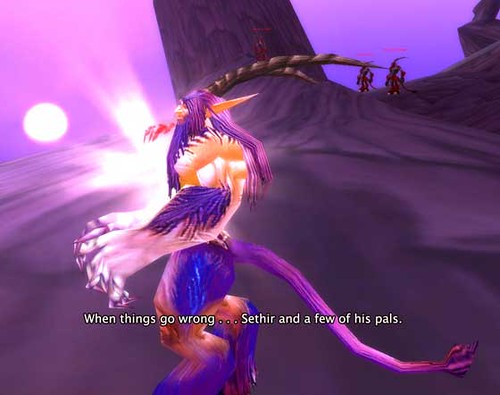 NOTE: The tree branch extends out from the ground, but you do not want to fall off; you will be falling off the edge of the world, essentially, and you will probably have to seek GM help. If this happens to you: in Help go to “open a ticket“, choose “stuck” as your problem and click “auto unstuck.” This will bring you back to the graveyard where you can ask the Spirit Healer to rez you. You will take the rez sickness penalty, but it only lasts about 10 minutes.

Return to Syurna with Sethir’s journal and receive your XP and the Blade of Cunning, a unique one-hand dagger with +2 Agility and speed 2 that does 6.8 dps. Sweet!