I’m going to start a series of “basic questions” posts here. If you’re an experienced WoW player, since, oh say… Vanilla, it’ll be too basic for you. Someone just starting out, on the other hand, is who these posts are targeted towards.

I’m also posting these on my G+ page, using the hastag: #basicwowtips. Feel free to add your own thoughts either here or there.

So How Long Does it take to level up? 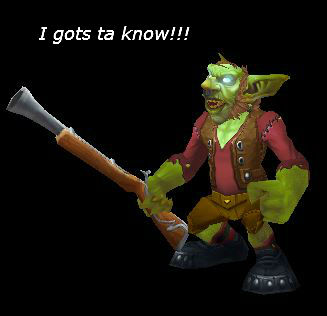 It depends on a few things, which I’ll hit first:

Best time I ever saw? My boys paired up and did the RAF thing, plus heirlooms, plus a leveling guide, and hit 80 (before RAF was raised to 85) in 17 hours in-game time.  The younger one is pretty hard-core and pulls the older one along.

Given all that, figure 3 days in-game time to 90. As for me, I’m slow, so 13-14 days in-game time. Mostly by questing. I’ll spend time crafting or gathering or exploring or whatever. That’s about the time my tank took, and there was Blacksmithing and a fair amount of mining when I was bored with dungeons, at the moment.

I’ve heard of people doing it in 7 days or so, with heirlooms and without RAF. There are probably faster cases. A leveling guide will speed things up, a lot, if you’re questing. It won’t do much for you in the dungeons or PvP, though. With RAF good to 85 your “get to 85” time might be as low as 20 hours.

My recommendation: Questing (unless you’re a PvP fan and your side wins enough to make it worthwhile) with heirlooms and queuing for dungeons. Quest till the Queue pops, kill things, return to questing.

Of course, in Warlords of Draenor it will take zero time to get to 90, as there will be one “insta-level to 90” available to any of your characters, whether or not your already have leveling anything to any level.

What’s your best time to 90 and how did you do it?