I think this is essential reading for anyone intending to do Cataclysm dungeons and raids:

What Wrath players need to know to not suck at Cata!

Get ready for a whole new world.

A “Feat of Strength” will be gained if you’re torched by his breath. You will also gain gear damage and a corpse run.
More on MMO Champion

It looks like it’s official: World of Warcraft: Cataclysm

will be released on December 7th, the same date as another event of particular interest to many.

MMO-Champion has the press release, but it’ll be on many sites.(Any emphasis below is mine.)

IRVINE, Calif., Oct 04, 2010 (BUSINESS WIRE) — Blizzard Entertainment, Inc. today announced that World of Warcraft(R): Cataclysm(TM), the highly anticipated third expansion for the world’s most popular subscription-based massively multiplayer online role-playing game*, will be released starting on December 7, 2010. The expansion will be available on DVD-ROM for Windows(R) XP/Windows Vista(R)/Windows(R) 7 and Macintosh(R) at a suggested retail price of $39.99 and will also be offered as a digital download from the Blizzard Store. A special Collector’s Edition packed with bonus items will be available exclusively in retail stores for a suggested retail price of $79.99.

“Cataclysm includes the best content we’ve ever created for World of Warcraft. It’s not just an expansion, but a re-creation of much of the original Azeroth, complete with epic new high-level adventures for current players and a redesigned leveling experience for those just starting out,” said Mike Morhaime, CEO and cofounder of Blizzard Entertainment. “With the help of our beta testers, we’re putting on the final polish, and we look forward to welcoming gamers around the world to enjoy it in just a couple of months.”

The first two World of Warcraft expansions, The Burning Crusade(R) and Wrath of the Lich King(R), each shattered PC game sales records upon their release.* In Cataclysm, the face of Azeroth will be forever altered by the return of the corrupted Dragon Aspect Deathwing. Players will explore once-familiar areas of the world that have now been reshaped by the devastation and filled with new adventures. In an effort to survive the planet-shattering cataclysm, two new playable races — worgen and goblins — will join the struggle between the Alliance and the Horde. As players journey to the new level cap of 85, they’ll discover newly revealed locations, acquire new levels of power, and come face to face with Deathwing in a battle to determine the fate of the world.

It’s not an open beta, yet, so signing up gives you that chance to participate.

It sounds to me like Blizzard is pretty confident in their development process and progress. The new zones are looking great, and not only of the new zones. Have you seen the pics of the Undead area?

Will it be a solo Pally or DK that gets to 85 first? Warrior and healer team? What do you think and how much time will it take you?

From MMO-Champion the release date is one week before the start of the new arena season, which is Dec 14.

Don’t be surprised if it’s pushed back.

Rumor has the 4.0 patch coming in next week. Time to plan to rebuild all your builds.

Well, there would be more notes, except that, at this moment, trying to load any character reliably crashes the client.

Ok, now onto the stuff you already know:

A lot of the Cataclysm features will be unleashed in the 4.0 patch, currently on the test realms (data is being downloaded, but it goes live when???) This includes a complete overhaul of the talent system. (This also means that those of us with build guides had better get to work.)

I was able to hit the character screen in the beta, where I saw this: 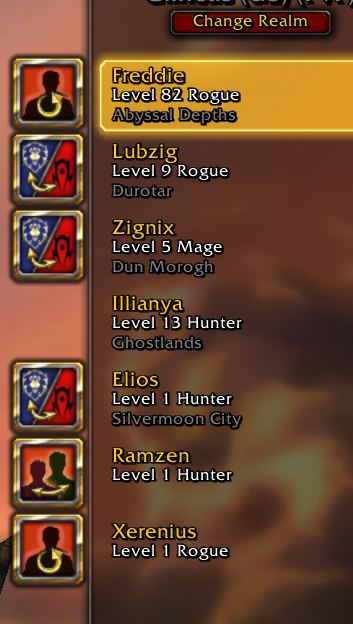 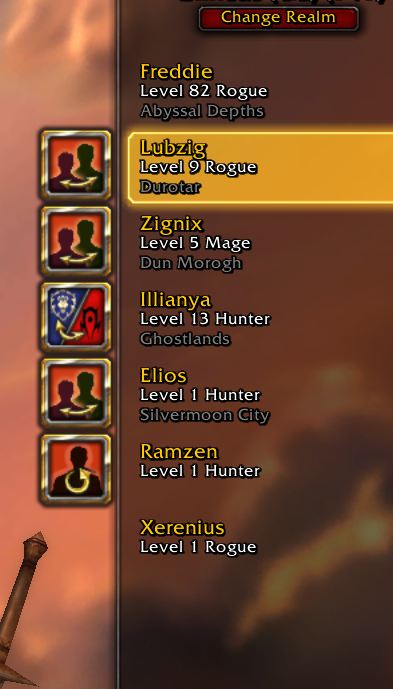 I guess the belf discrimination was just a rumor. So maybe this is something that’s being played with, at the moment? I’ll see what I can find…

(By the way, there’s a Beta FAQ here – it mentions a fix for logging into the beta, but it didn’t work for me. )

Ok, the log-in issue is fixed, but you have to delete a cache folder.

Go to your WoW Beta Folder > data and delete the cache folder.

This seems to work for most people.

Ok, found the button thing. It’s a test of their paid change system, though these changes are free. But, most of you already knew that. These buttons will not be on the live game, unless you’ve paid.

In the latest build players will notice paid character services buttons appear next to characters at random on the Character Selection screen. These are the buttons you would normally see after purchasing any service, such as race, realm, or faction changes, or character customization. If a character service button shows up next to one of your characters, you can click it to make use of a free race change or character customization (faction change coming soon). You can make use of these buttons as often as you like, but the services for which you’re selected are randomly chosen for you and will update every hour. So, say if you don’t want to change your race but would like to customize your appearance on a specific character, you will need to wait for the right button to appear.

Please note that these buttons are only for beta testing purposes and are not intended to be released for free on live realms. We want beta testers to stress test our paid services so we can ensure they are operating smoothly when World of Warcraft: Cataclysm is released.

Gotta love that right hand dagger. 🙂  Now really, isn’t that something that should be a low level dagger in the Goblin or Orc area? 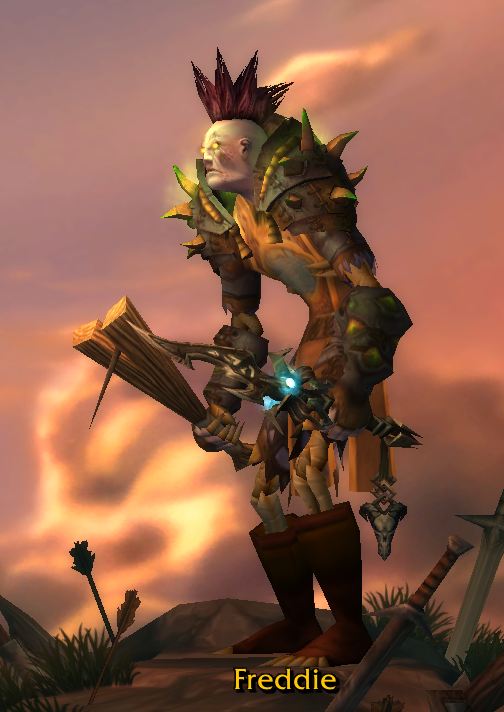 Vashj’ir, one of the new Cataclysm zones (80+,) is an ideal spot for the avid fisherman. Loaded with everything from crabs to lobster to grouper and big eels to giant whale sharks this place has everything.

Then, when you’re bored with catching giant fish the local Naga might come on board, say “Hi!” and escort you down for a scenic tour through their underwater city. Make sure you have a Naga approved Visa or getting back might be difficult.

To get to Vashj’ire and Nagaville, the first time, you’ll need to take the boat. Hordies head out the main gate of Orgrimmar, take a left, and go all the way to the beach. (If you’re facing Org, hang a right.)

You’ll find a dock. Hop on board and head on out to the greatest fishing grounds you’ve never seen.

Then, if for some silly reason, you should hearth back to Org, say… to get trained, then how do you get back to the fishing grounds (at least, for the Beta?)

Rozlyn is here to help. She’s standing in the doorway to the Org Mayor’s office and will teleport you back to Vashj’ir. Make sure you stock up on fresh bait and tackle, first. That’s Roz in the doorway. (click to embiggen.)

Another way to go is by air. There is a flightmaster in Vashj’ire that will send you to Undercity, so grab that one and you’re good.

The Orc is your flightmaster to the big city, the “guy” in the water is your local flightmaster.The Location is “Sandy Beach.”

Sandy Beach is here… at the marker, south of Kelp Forest. The first FP you grab should connect to it automatically.

Now go catch a big one!

Me and my bud, Thrall

The Goblin area is pretty nicely done and pretty funny. I won’t give any spoilers here other than to say the Goblins are fond of explosives. Lots of explosives. And they’re pretty creative about what they blow up.

Think of a whole race of mad scientists…

I’m sure we’ll see a few Goblin-Gnome rivalries playing out.

Only the berserkers had this model, all the others were fine. Also, there was no animation with this one. It was amusing to see this static image block moving around.

By the way, these are the guys in Eversong Woods, South East of Farstrider Retreat.

Some shots taken while flying around Orgrimmar and Durotar.

Looking back towards Orgrimmar from just south of the Durotar to Barrens bridge.

Land of the trolls. They seem to be having some issues with the new Orgrimmar (and Horde) management, under the newly crowned Hellscream.

More coming, along with some build notes.