One of the many additions, for all you Arena fans out there, that’s coming to WoW with The Wrath of the Lich King expansion is the new Orgrimmar arena.

Spooncraft has a video which shows of some pretty interesting features of this particular arena.

Holy crap am I excited about Arenas!? YES I AM! This would be a first for a long time, but I think Blizzard has just made arenas fun for me. I figure if theyâ€™re going to turn the PVP game into an FPS Team Deathmatch, then at least make the maps fun to play.

Check it out here: First Look at the New Orgrimmar Arena in Wrath of the Lich King

As I mentioned previously, the pre-order page for Wrath of the Lich King is up on Amazon.com.

The release date has been moved from Nov 3 to Nov 13 (darn close to my Birthday!) Given that Blizzard is willing to let release dates slide if things need more work I wouldn’t say the 13th is etched in stone, but it’s probably close.

edit: Since it’s on the front page of the official World of Warcraft site that date’s probably pretty well etched. Still, don’t be too surprised if it slides a bit.

Get yours here: World of Warcraft: Wrath of the Lich King Expansion Pack

So just off the top of my head, here’s a reminder of what’s coming in November:

Word has it that Bliz is going to provide a free patch that will incorporate a lot of the Wrath changes. I expect this is to make sure that people who don’t buy Wrath are still on, more or less, the same page as those who do buy it.

This will be a huge download, but will be handled as a background process so it shouldn’t force long waits on people. Estimated time on a dial-up connection is 3 weeks, 2 days… (just kidding, I think.)

When does it happen? Real Soon Now.

Get your Wrath on Amazon, here.

By the way, you DO have to have Burning Crusade installed in order to play Wrath.

If you want it then check back to the Amazon page every now and then, to get the Amazon price just in case they get some in. Or camp your local game store.

My wife and both kids have got their [tag-tec]Wrath of the Lich King[/tag-tec] beta keys, but not me. Sob. Guess I’ll just mooch off their accounts. Mwahahaha!

So as you may know, especially if you read my other post WoW PvP, Blizzard is letting you copy premade templates of level 80 PvP characters into your Wrath beta account. (They’re also letting you move your regular PvE characters to PvP servers, but that’s another post. )

If you have your beta key, you log into the WoW Beta page, pick the copy template option, and go from there. You’ll land on a page which gives you two choices, one ally, one Horde, for each class in the game. You can pick any three and it takes about a day for them to copy over.

Once it’s copied you’ll have a nicely PvP geared 80, in Dalaran, to play with. My Rogue, for example, has 747 resilience. Not bad. 😉

There’s an interesting glitch, though. Apparently, and I assume this will be quickly fixed, some classes have invisible gear. The female Blood Elf Pally, for one. There are others.

The gear is a mix of blue and purple, so this isn’t a maxed out character. PvE geared characters are not available. I assume this means they want to test the PvP system, right? Well the instances are open (and Rogues don’t need a key,) but the battlegrounds and arenas are not, at least as I write this. Being beta things will change and then change again.

Here’s the Rogue with Weapons: 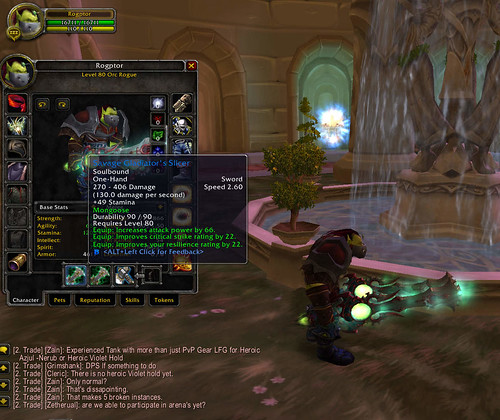 If you’re wondering… I went with a Shadowstep build on this one. The world server is down at the moment, so I don’t have exact numbers, but it’s a pretty basic build. You can hit the level 80 WoW Talent Calculator here and play around with builds.

You do start with some stuff and some nice bags. Haris Pilton, in Shattrath, sells the Gigantic bags at a Gigantique price.

Here’s a screenie of the Orc Rogue with bags. Note the bandages (heal 5800) and the poisons, which are now (will be) bought from vendors. No more flash powder for your Vanish, either. 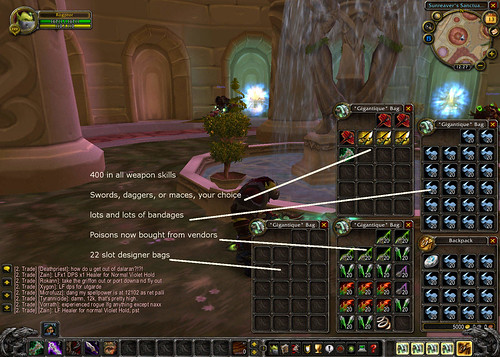 Naturally, when Wrath goes live all beta characters will be deleted. Still, this gives us a good chance to play around with talents and see what gear will be coming.

I’ll probably use Zygor’s Guide and blast my Rogue to 80 ASAP, then work for some of that gear in the BGs and Arenas (with my 1200 Arena rating.)

Deathknights are a lot of fun so far, so that one will be next. After that, we’ll see.

I expect all the new talents and everything DeathKnight will be significantly tweaked between now and release, so take all beta info with a hefty lump of soothing spices.

[tag-tec]Wrath of the Lich King[/tag-tec] is going to bring many changes to the World of Warcraft and one of these changes will be to crush many of the addons that you’re using. As if you didn’t already have that figured out.

This is to be expected given all the basic changes being made. Blizzard is revamping a lot of stuff and I think a lot of it isn’t making it into the patch notes (big surprise, right? ) So with the addons there are many that work and many others that partially work and some that are totally broken.

Being that the whole thing is still in beta I think we can expect more breaking, more pwning of defenseless addons, and maybe a few that suddenly start working.

WoWwiki has a list of wow addons that currently work, or don’t, with the Wrath beta. Check it out here.

If your favorite addon is broken you might want to send some flowers and/or cookies to the developer and beg them for a Wrath update.

This is from the G4 website. Blizzard is thinking a little farther into the future here:

Blizzard said that they already have plans for future expansions of World of Warcraft even before the release of Wrath of the Lich King this fall, according to an interview with VG247. Lead designer Tom Chilton said:

â€œWe actually already have ideas on how weâ€™re going to expand on that in the future,â€ Chilton told us when asked if more land was going to be added to the game…

Looks like the racial abilities for all the WoW races are being tinkered with. Spooncraft has some info on this. Always keep in mind that this is in beta and nothing is set in stone, yet.

So I finally logged back into the [tag-tec]Wrath Beta[/tag-tec] yesterday.

Hmmm… all my Death Night talents have been reset. Of course talent tweaking and shifting is to be expected in a beta and it gave me a free reset, so what the heck. Still blood, but maybe a tad more efficient.

Hmmm… Mission: Gateways (one of the earliest Hellfire quests) seems to have caught a little bug… Hop on the flying beastie, line up for the bombing run, get glued to the ground with no control, and what’s this? We seem to be glued to the ankles of this 20′ tall demon thing? Who doesn’t even know we’re there?

Hmmm, there’s four of us here, all glued to his ankles. Couple of Allies, and Undead, and me, All DKs. Ok, wait, he’s wandered off and we’re not moving. Whoosh! Ok, we’re all back on his ankles.

Alt 4f (exit game) in hoped of canceling this quest. Log back in, still glued to his ankles, server goes down.

Log in later. Ok, I’m flying back to the beastie dude. Try again? Sure, maybe it was just a one time thing (that affected several others?) Coming in for a bombing run and… ankles again.

Log back in, flying back to beastie guy. Ok, let’s try this: Go on a bombing run and just enjoy the ride. That works, no ankles, fly back and hand in the beast.

Try again, this time with bombs. No ankles, but can’t score with bombs. I know, put the green targeting field on the teleporter and drop the bomb (I have done this on another character.)

Nope. Nogo. 6 more tries, no teleporters destroyed. Oops, back to the ankles, but this time I’m somehow kicked loose. Fly back, hand in beast, and log.

Big Red Kitty has more on the beta experience: Just Freak Out Already

Bits and pieces from other places.

But many people interpret the patch announcement, and the new features that were announced for Wrath of the Lich King and which just happen to be similar to features that Warhammer Online: Age of Reckoning has, to be a defensive move by Blizzard…

Here’s the rest: WoW is fighting back. There are a ton of comments on that post, so join the fun.

Blizzard does need some serious competion, but WAR doesn’t seem to be it, except maybe in the PvP area, though I think WAR will do well if it has a smooth launch. I think Bliz has the formula that most others are missing, but that doesn’t mean they can’t be on the lookout for nifty ideas that make their game more interesting for more poeple.

Spooncraft has a post on new voices in Wrath, and a video with the voices: Wrath of the Lich King Beta 8885 brings new Death Knight Voice Options

Spoon says:Â  Awesome changes, not exactly sinister but at least now Blood Elf Males actually sound like MEN. You have to go into the sound options menu (if youâ€™re a Death Knight) and turn this feature on for it to work. I am very excited about this and hope that it stays in game permanently.

Go check it out. Now I’m going to go see what my DK troll has to say.

Parry! Dodge! Spin! has a post on what’s happening with the Rogue talents.

[tag-tec]Wrath of the Lich King[/tag-tec] is going to do some interesting things to pets, especially in terms of leveling your pet and loyalty ratings.

Bats Sonic Blast. What makes this two-second stun better than everything other petsâ€™ is the uber-short cooldown. If youâ€™re mana-draining hunter in a 5v5 team and your primary target is the paladin, itâ€™ll be hard to choose a better pet than a Bat to interupt that paladinâ€™s heals.