[tag-tec]Wrath of the Lich King[/tag-tec] is going to do some interesting things to pets, especially in terms of leveling your pet and loyalty ratings.

Bats Sonic Blast. What makes this two-second stun better than everything other petsâ€™ is the uber-short cooldown. If youâ€™re mana-draining hunter in a 5v5 team and your primary target is the paladin, itâ€™ll be hard to choose a better pet than a Bat to interupt that paladinâ€™s heals.

WoW Insider has a fun post on the Great Dwarf Hunter Nesingwary, seen in Stranglethorn Vale and Nagrand. Nesie, of course, is all about hunting the various beasts in the area.

Now one could argue that he’s just thinning herds that grow impossibly fast or maybe he’s just a minion of evil with his wanton slaughter of innocent raptors, er… critters.

The Wrath expansion seems to be bringing in some competition for Nesie:

But that, of course, doesn’t keep the hippie animal lovers from fighting back — as you might know by now, in the expansion Nesingwary is going to face some opposition in the form of D.E.H.T.A., or Druids for the Ethical and Humane Treatment of Animals.

Now let’s say that Nesie gets tired of these guys. Imagine one part of the quest chain being to harass (ie: kill) DEHTA members: “Ok dude, it’s a Druid. Get 15 of your closest friends…”

Or that the DEHTA crowd gets a quest to harass (ie: kill) Nesie’s hunters.

I’m not saying that this will happen, or is even likely, but it’s fun to think about. Especially on an RP (Role Playing) PvP server.

Anyone have any other suggestions to spice this up a bit?

Parry! Dodge! Spin! has a post covering the various Glyphs that the new Inscriptions will add to the [tag-tec]Rogue talents[/tag-tec] and abilities:

First of all, I think every other class needs to send Blizzard a thank you card for the following change to Mace Specialization. As a Combat Swords Rogue (and as a Resto Druid), Iâ€™m pretty excited to see it myself. This should make Mace Specialization a bit more attractive for raiding as well.

You’ll want to look at the comments, too. As usual with something like this there’s a wide differing of opinion.

One of the comments points out that resilience pretty much negates the crit bonus. Still, not everyone in PvP is running around with 400+ resilience or s4 gear. For leveling the damage bonus might be better than the rare stun proc.

Keep in mind that this is still in beta test and the final numbers may well be somewhat different. I’m sure that no matter what change Bliz make there will be whoops of praise and howls of outrage.

I think a lot of the Glyphs look pretty nice. What do you think?

Edit: Azande, in the comment, has some interesting stuff for the rading Rogue and more remarks on the raiding potential of Glyphs.

Combat Expertise has linked to the official Wrath of the Lich King trailer. Check it out.

Lum the Mad has written up a review of the [tag-tec]Deathknight [/tag-tec] starting area, focusing on the lore aspect, and he includes dialog and videos. His feeling is that, until now, Blizzard hasn’t done as good a job as it could have in incorporating world lore into the gameplay.

In the DK area you’ll see that your actions have an effect on the world, which is pretty damn cool. Having played through roughly half of the DK area I’d say it’s fun, different, and if you … well, nevermind. 🙂

I think people are going to really enjoy it. Of course, since it’s a beta, everything is subject to change, but I think the lore will stay pretty much intact.

Here’s what Lum has to say about it:

The presentation of the questlines is nothing short of exhilirating. You are the Lich Kingâ€™s vassal, the bringer of the apocalypse. You are the primary bringer of death and destruction to the Scarlet Crusade. You work to gather information and destroy their very hearts, minds and bodies. And with each phase, the landscape and figures change to reflect the strides youâ€™ve made. And all of this is presented in a story that has a clear beginning, middle and end.

Keep in mind that Lum’s post does include spoilers. So if you want to discover everything for yourself then just read the first few paragraphs, or skip it and wait for your beta key or the official release.

Here’s the rest of his post: WotLK Beta Review: The Death Knight Tutorial

If you haven’t already you can pre-order Wrath from Amazon.com: World of Warcraft: Wrath of the Lich King Expansion Pack

Here’s my troll DeathKNight with a couple of buddies in the upcoming WoW expansion, Wrath of the Lich King.

Here’s my pal, the LK himself: 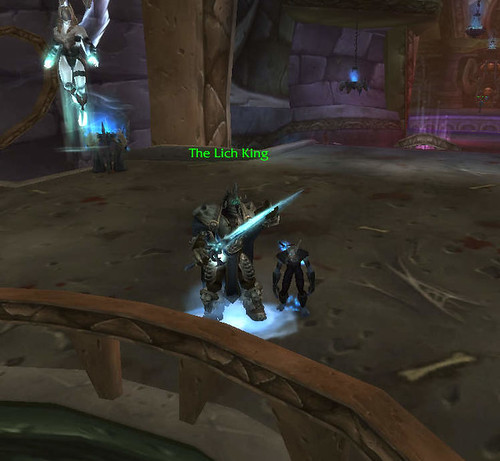 And here’s my bud, the Prince: 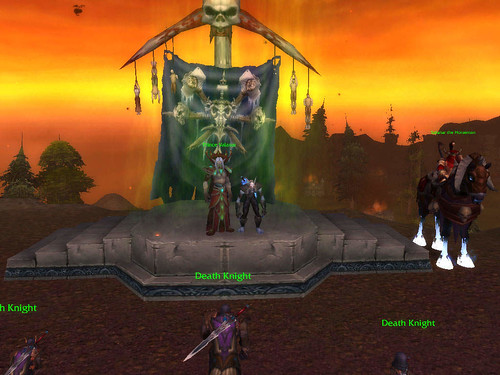 Joana, of Joana’s Horde Guide fame, has been touring the beta with, what else? A hunter. Think he’ll have his Horde leveling guide updated for WotLK when it’s finally released? I do. He’s uploaded some screenies, here

Here are a few more screenies, courtesy of Earnest Cavalli, of Wired Magazine.

There’s an extensive list of WotLK patch notes here. Lots of info on what sort of tweaks might happen to your favorite class(es.)

Of course, since this is the beta test everything will probably change between now and the release date.

So look at it as what they’re playng with now, not what the final version will be.

D’oh! My wife got the beta key!

Maybe ours will arrive soon…

And our lips are sealed.

World of Warcraft: Wrath of the Lich King Expansion Pack

Edit: Just as a reminder, Wrath of the Lich King is bringing:

Believe it or not, I’am actually most looking forward to the character customization. Silly, I know.

Leveling to 80 and exporing the new PvP areas is a close 2nd. Who knows? Enough practice at this stuff and I might be able to get my arena rating above 1000! Well, maybe. 😉

So what’s the one thing that you are most looking forward to in WotLK?