I was running someone from my guild through RageFire Chasm (in Orgrimmar) the other day with my (70) Rogue. I was letting him loot everything and at some point he mentioned that he really needed the money (lev 12 Priest.)

Which seemed to blow his mind. I told him that gold was easy, which blew his mind further. Well, once you get a character or two past level 5 or so, gold is easy.

Now, I’m not talking rapidly earning thousands here, with starting characters. It’s perfectly reasonable for 70s to have that, after all, who do you think is buying all those Epic Flying Mounts at 6k (for mount and training?) Not to mention Epic items in the auction house for 1-2k each or enchants which cost 600 to 1000g for the mats.

But it’s also reasonable for very low level characters to have a lot more gold at hand. So here’s a getting started gold guide for those who aren’t already 70, and for a few that are. This isn’t specific to Alliance or Horde either.

First off, you’re going to level one character to 5, train basic Enchanting at the city trainer, and then run that character to the Auction House in whichever capital city is closest.

This will be your permanent Auction House banker (or mule.) This character will spend 100% of it’s time at the AH and will handle ALL of the buying and selling for all your other characters. You won’t be leveling this character past 5, so don’t worry about the perfect name or look, but please don’t name it “MoneyBags” or anything like that.

By the way, having a separate character to do all your buying and selling will have the additional benefits of not forcing your friends, enemies, and teammates to wait for you while you browse and sell at the AH.

Your main characters, throughout their entire careers, will take any and all sellable items they find, either by looting or gathering, and will mail all of these to the mule, to be sold on the AH.

Yes, this includes teeth. Sell grey items to vendors, everything else goes to the mule and the AH, with the exception of stuff your main will be using (eg: cloth for 1st aid, good weapon drops, etc.)

Your mains will never set foot in the AH, unless looking for specific items to upgrade.

For your main character(s) get skinning and mining as your primary professions and cooking, fishing, and 1st aid as your secondaries. Why not herbalism? You can certainly take that one, if you like, but ores and skins are always in high demand, far more so than herbs in my opinion. That said, there are some higher level herbs that sell for lots, so it’s your call.

Skip the other professions for now. They’re cool and fun and very expensive to level up. Right now we want to get some cash flow.

Generally you can find a trainer for one of these gathering skills at the first town you hit when leaving the starting area. You’ll probably have to hit the capital city for the others.

Sell everything as you level up to at least 5. As soon as you leave the newb area, and hopefully have a few silver to your name, head to the city and get at least the mining and skinning skills. Make sure to get your skinning knife and pick, as well.

The Process to Gaining the Gold

Skin every skinnable critter you kill. Keep the ruined scraps of leather, as well as the light leather. When you get a stack of 20, or a few stacks, send them to your mule. Light leather goes anywhere from 75s to 3g a stack, depending on your server and how much is on the AH at any one time.

Tip – ruined scraps do sell, sometimes for more than you might think. If you’re a leatherworker save them, and if the scraps are dirt cheap, buy them, and make them into light leather, then make your items. You might save some gold this way.

So why continue skinning if light leather is only 75 silver a stack? When you get to Outlands you’ll eventually be skinning Clefthoofs. Those leathers sell for several gold per piece. There are some other skins that sell for even more.

In your 50s you’ll be seeing thick leather and rugged leather, both of which which sell very nicely for a nice price.

Mining and Herbalism – At the top left of your mini-map is a round gadget that will let you scan for all sorts of things, ores and herbs among them. Set it to scan for minerals or plants (depending on which you have) and these items will appear on your mini-map, making them much easier to gather.

If you’re a Hunter these marks will look just like the neutral beasts you see when tracking beasts, so you’ll have to turn off beast tracking or be a bit more alert.

Then, if you’re not a Night Elf, do the rounds of your low level (5-10ish) zone and start gathering. Look for ores around the hills and mountains and sometimes underwater. Gather stacks and stacks and sell them.

The Night Elf Gods seem to have forgotten to put any ores into Teldrassil, so NEs will have to head over to Darkshore to get any mining done. Darkshore has plenty, but you’ll have to be higher level.

You’ll need a 65 skill to move past copper to Tin ore, and 125 for Iron, so keep your skill as high as possible.

Enchanting – As you level up you will come across the occasional green item that you can’t use and that won’t sell very well (some of these greens do sell well, so try to be aware of that.) The worthless green items are sent to your mule to disenchant into parts (such as strange dust, etc.)

Cooking and fishing – Learn to cook and you’ll save a bunch of cash by not buying food. Plus, many of the items you cook up will provide nice buffs and those items sell quite well for a good price.

Fishing is a source of raw materials to level up your cooking, a source of food for Hunter pets (those that eat meat, anyway,) and a source of gold by itself. Oily Blackmouth, Firefin Snapper, and other fish sell quite nicely.

Some tools to use:

So how much to sell it (ores, skins) for? Browse the AH for whatever you’re selling, copper ore, for example. You’ll see ore for sale in stack sizes from 1 to 20. I like to look at the first few few stacks of 20 and price it right in the middle.

Typically people buy lots of ore at one time, to level whichever profession they’re working on, so they’ll buy everything at whatever they consider to be a decent price. This means that you don’t have to undersell the competition by much, if any.

It’s ok if you do, though. Someone like me might buy up your under-priced stuff and resell it for a profit. I just think that you might want to keep that money for yourself.

It’s pretty much the same thing with herbs and enchanting bits.

As an example: Zognits, the level 70 warrior, might decide it’s time to level Blacksmithing. So he’ll buy a ton of ore of various sorts and go from skill 1 to 300 in a few hours (and spend a lot of gold doing it.)

Johniejohn, the level 63.5 leatherworker might decide to do the same, so might buy 100-300 pieces of light leather in one shot.

Big bags – always get the biggest bags you can afford. It won’t be much to start with, but you’ll have the cash sooner or later and you can get them at that time.

A recommendation – There are a lot of ways to get the gold, some of which I’ll be writing about in later posts. One thing that got me going was just breaking down and buying a gold guide. You get a ton of step by step gold making tips that will get you into that Epic Flying Mount and expensive enchants when the time comes.

In my opinion the Massive WoW Gold Blueprint is far and away the best gold guide out there. Why? Not only does he hold nothing back, every last step is done with videos, and it’s a system where you can start rapidly accumulating gold with very low level characters. It does cost more than the others, but you get a lot more workable info, especially if you don’t already have a level 70 character.

For example, this character is level 5. None of my characters on this server is over level 30. Kind of a nice stash there. Click the image for a bigger picture. 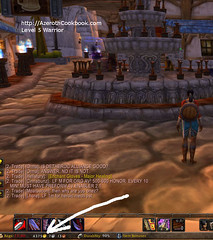 Here’s the direct link to the Blueprint, or you can read what I’ve already written about it, and maybe still be able to access some free videos. Here it is: Massive WoW Gold Blueprint