Update 7/15/2012: I did a speed run, using these methods, sometime back. Brand new characters, brand new server, no friends, guilds, transfers, gold buying, etc. I made over 6k gold in 30 days without trying too hard. Since the entire guide is in video format it should be easy for anyone to learn the techniques and do the same. Or better. Currently I’m doing over 5k gold per day. That’s mostly through crafting, but I still use these techniques and when starting on a new server I still use them extensively.

The Massive WoW Gold Blueprint, by Jon Kenins, is probably the best guide on the market to making a ton of gold in the World of Warcraft.

Well so what?? There are a number of them out there, aren’t there? Yes, there are, but there are a couple of very interesting differences with the Gold Blueprint:

Jon is confident enough in what he is teaching that he states, right up front,Â  I’ll show you how to get 1,000 Gold in 30 days (starting from 0 on a new server.) No 70s, no buying gold, no begging, no borrowing from the guild. From scratch with brand new, level 1 characters.

So How Does This Work?

First, some background: Typically one line of advice given (and I’ve given it) to get the gold is to get the skinning, mining, or herbalism) skills and work them as you level up. Skins and ores, and especially herbs right now, of pretty much any level, sell quite nicely. Ok, yawn, you’ve heard those before. That’s my point.

Of course, there’s also a number of good farming opportunities in the Outlands which can yield upwards of 1-200 gold per hour. Of course most of us would rather be raiding, PvPing, or having fun rather than mindless grinding.

Additionally the level 70 crowd can do the various daily quests, each of which which pays 5 to 20 gold, plus some quest rewards and whatever items are collected on the way. If you’re efficient with your dailies you can easily make over 100 gold per hour. Heroic dungeons, open only to 70s, are also good sources of loot.

I think so. Far beyond a PDF collection of tips on grinding locations, The Massive WoW Gold Blueprint is a set of videos and audios that takes you on a step by step route from getting started to Auction House Mastery.

Every tip is covered with a video that shows you exactly how it’s done. Even if you’re brand new, with no character over level 1, on a new server, and don’t know Stormwind from Karazhan. In fact, here are some example videos.

This quote from Jon on the Blueprint Home Page nicely sums up the whole Blueprint system:

Here’s what I discovered (referring to gold gathering.) Once you have a good handle on playing the Auction House, you can make TWICE AS MUCH Gold per hour by simply sitting in the Auction House buying and selling goods, compared to any other activity you can think of in WoW. Twice as much!

That was an eye opener for me. But that’s not all. I also discovered that the most efficient way to play the Auction House is to dedicate a team of characters specifically to auction activities. You actually LOSE money by trying to work your established higher-level toons into the mix.

I’m not talking about a single “mule” character that you park in Ironforge or Orgrimmar. I’ve tested and tweaked my way to an optimal set-up of six alt characters, stationed in specific locations where they become the backbone of a system of “Profit Pipelines” . . . an underground system that works like crazy

Nowadays, I spend 1 – 2 hours per day on Gold-making activities in the Auction Houses on the two servers I play regularly. I make a comfortable 5,000 Gold per week. I know I could make five times as much if I were willing to put in 8 hours a day at the Auction House. But what would be the point?

So is this really possible? Absolutely. I’ve been using these techniques to great effect and when you read the Blueprint forums you’ll find lots more people also getting great results. You’ll also find additional tips.

The weak spot? Well, the one weak spot, if you could call it that, is that there’s a bit of a learning curve. There’s no grind here, looking for that magic bullet that will make you rich. You won’t be given the secret location to the special item which sells for 5k gold (it’d be nice if there was such a thing, wouldn’t it?) You’ll have to spend the time to watch the videos and run some characters around. Hard work, right? 😉

You’ll also have to use a couple of character slots to build your network, but do you really have that many main characters?

Now some people, who haven’t a clue, will tell you that to make gold you need to do your dailies (decent gold, but you need a 70) or, if you’re low level, to gather this or that (eg: linen cloth) and sell it. That works, but it should only be a start. The Blueprint will end the need for using your mains to dig for rocks.

The problem with using your mains for endless gathering is that you’re not using them for the fun stuff, ie: PvP, Raids, sacking Stormwind/Orgrimmar, etc.

Blueprint step 1 is easy enough (none of the steps are as hard as farming primals.) You’re going to make a level 1 toon and run it straight the closest capital city. This character will not level and will, in fact, do nothing except handle all the buying and selling chores for your mains and your network.

Step two is to get a cash flow started, so you’ll make a second character who will do the gathering. Gather up a few stacks of ores, skins, or herbs (or even fish) and send them to your mule to sell.

Nest, you’ll dive into buying, trading, cross-factions, and obtain expertise with the Auction House. You’ll spin those first few coins into enough gold to buy your Epic Flying Mount (6,000 gold with the training) out of petty cash. 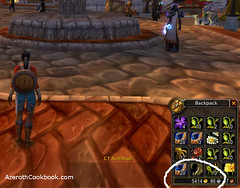 Here’s a screenshot of my Alliance Stormwind mule (Auction House Banker.) I don’t have any characters over 35 (as of this writing) on that server and the only grinding I do is incidental skinning and mining.

Not a bad total. All from using only some of the techniques of the blueprint. No cross-faction trading and not much of a network. So if a person can do this using only a few techniques, what could one do by following the whole blueprint?

And yes, that Epic Flying Mount will be petty cash (when I get that character to 70) along with some pretty decent twinkage (getting the hot gear and enchants to extract every last bit of power from a character.)

Here’s What You Get

Once you have your Blueprint you’ll login to the site and access four modules, each intended to take a week (about an hour or two a day of game time,) but it’ll be a lot less if you have more time and/or are already clued into how the game works. Dozens of videos are broken up into the following sections:

Update: In preparation for the Wrath of the Lich King Jon has updated the Blueprint to cover Cashing in on Herbs and Inscription.

Of course, the first thing some people will say is something like this, “Bah, that’s easy. I can do 1k gold in a day or two.”

Sure you can. But can you do that when none of your toons is over level 10? When you don’t have a guild or high level character donating cash to your characters? In other words, starting from scratch on a new server? Can you earn 1000 gold in 30 days, starting from zero?

How’s this? To prove it’s possible, Jon came up with the “30 Day Speed Run to 1,000 Gold.” He gives every last detail, including what good he obtained and how he sold them. By the way, he made a lot more than 1,000 gold and you get all the notes from that speed run when you grab the Blueprint. 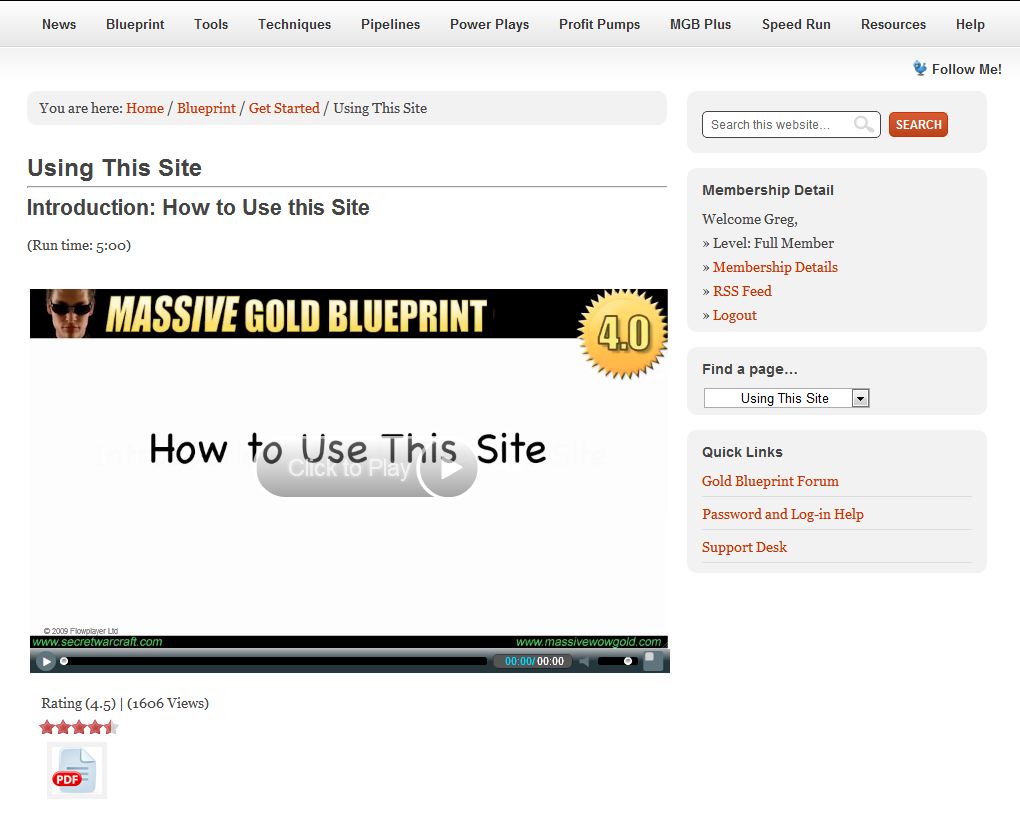 Note that I am a full member. The video is a guide to using the site and getting the most out of it, also available as a PDF. Tthe items in the menu at the top of the page will let you bring up any of the over one hundred of the videos on the site (and the site is constantly updated with new stuff.)

There’s also a forum with a lot of additional info and tips.

To sum it up – If you’re the player who’d like to have a lot more WoW gold and either doesn’t have high level characters or would like to use them for something other than farming gold, then hop over to the Massive WoW Gold Blueprint and join us on the inside, right now.