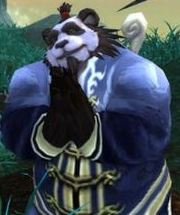 As everyone knows by now, the new World of Warcraft expansion has been announced: Mists of Pandaria. It brings a new race, the Pandarians, playable by both Horde and Alliance. My guess is that the Pandarians will have, at least, two internal factions that aren’t exactly compatible, hence their respective affinities for Horde or Alliance. Who knows, that could just be my delusion.

Here’s some collected info on Mists.

Shrouded in fog since the world was sundered more than ten thousand years ago, the ancient realm of Pandaria has remained unspoiled by war. Its lush forests and cloud-ringed mountains are home to a complex ecosystem of indigenous races and exotic creatures. It is the homeland of the enigmatic Pandaren, a race that celebrates life to the fullest even while under siege by an ancient menace.

The new continent reveals itself to a broken world just as the Alliance and Horde are spiraling ever closer to a war that will consume all of Azeroth. Will the mists of Pandaria part to reveal the world’s salvation? Or will the battle to control this rich and breathtaking new land push the two mighty factions over the brink of war and into total annihilation? The answers await within Pandaria’s mysterious shores!

Go here to check it out: Unleash the Secrets of a Lost Continent

Myth-Games has this to say:

The zone will start off in a similar manner to the Deathknight zone, players who create Monks willget to work through quests learning about the four elementals, the Monk philosophy, and the need to save the four fading elemental spirits: Huo, the fire spirit; She, the water spirit; Wuguo, the earth spirit and Dafeng, the spirit of air.

The Pandaria zone is gorgeous, and the Monks look like a lot of fun to play. They remind me, at first glance, of Teras Kasi in Star Wars Galaxies:

The lore for Pandaria looks pretty interesting, and I’m looking forward to learning more about the zone and the Padarens over the next few months.

Here’s the rest, including the trailer: http://www.myth-games.com/news5073.htm

Joystiq.com covers some of the background and where Bliz is going with this:

Blizzard has made the next expansion in the World of Warcraft official as Mists of Pandaria, and after conquering other planets, the Lich King, and a big bad dragon, the Horde and Alliance are headed to … China. Well, not China per se, but Pandaria, a long-rumored, Eastern mysticism-influenced realm, where panda-based humanoids roam, brew and drink beer, and offer players the next five levels in their continuing progression.

As is often the case with this game, many players have revolted. The Pandaren have long been used as a joke in the world of Warcraft, either referred to on April Fool’s Day, or showing up in the company’s parodic Christmas cards. But lead quest designer Dave Kosak says players who scoff at Pandaria should think twice. “Maybe people, because they’ve only been portrayed as cameos or only April Fool’s jokes, people think that there’s nothing to this race, and that’s not it at all,” Kozak says to us during BlizzCon last week. “I think the Pandaren are kind of fascinating — they work hard, they play hard, they eat hard, they drink hard, and they don’t do anything half way.”

In a separate article, Joystiq discusses the Monk class, specifically the DPS aspect. It covers weapons, the lack of auto-attacks, and a few other items. Mostly speculation as we all know how thing might change between now and release. Also in the article is a short video with some of the Panda Monk moves. Hmmm… maybe I’ll do a Gnome or Goblin Monk…

We know the resource system has two parts: first, you have chi. Like rogue’s energy, chi starts at 100 and is consumed by using abilities. From Joe Perez’s first impressions, it looks like chi replenishes over time, and it also replenishes more quickly by completing combos. The other resource is orbs called light and dark force. These fill up by using abilities that cost chi and are then consumed to use other abilities. The light and dark force abilities don’t seem to cost chi.

The last thing we know for sure is that in current plans, monks do not have an auto-attack. Explained in the game as “needing to focus their energy between strikes,” this is the main thing that separates monks from all other melee classes. As a result, the ramifications of what this means is what I’m going to focus on first.

Yet more links to Mists info: