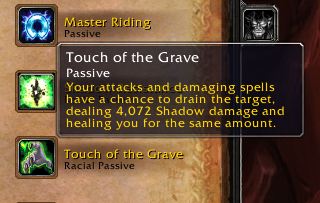 I was browsing the character creation in the Mists of Pandaria beta and found this interesting item: Touch of the Grave. It gives Undead characters a chance to drain life on any attack and heal themselves for that amount.

I can’t say if this will survive the beta, but given the health pools for Mists (I’ve seen level 90s with over 400k HP) this won’t be a big ability. It also adds some Undead color, so I think the odds are good that it will survive.

As I write this the ability isn’t listed on WoWhead, so I might have beat their data miners. I expect that will last about another 6 seconds. 🙂